A 17-year-old Kerala boy is building a Rs 10,000 robot to help his struggling mother with housework

Android Pathooty was inspired by a robot that cost Rs 3-4 lakhs and was used as a waiter in a restaurant.

Chathoth first got the idea when he was with his family at a restaurant in Kannur and saw that they were being served by a simple humanoid robot. He was 14 at the time and heard his mother exclaim if only she had a robot like this to help her with chores around the house.

Chathoth has always been a tech enthusiast and was very adept at automation. In an interview, Chathoth claims he has developed a mobile application to control lights, fans and all other electrical devices in the home. That’s why he was also convinced of this robot project.

First with his own robot, which they named Android Pathooty after a Malayalam film Android Kunjappan, Chathoth asked the restaurant about the vending machine in the same restaurant and was told it costs Rs 3-4 lakh to order one. However, they had no technical details about the system they were using.

Since buying such an expensive robot wasn’t an option, he started researching and soon discovered that there were several inexpensive ways to build such a system.

“There is no direct information on the Internet about the composition of a robot. But I noticed that the machine in the restaurant followed a fixed path. My research led me to find many videos that explained this technology,” says the 17-year-old.

Within a year, Shiyad developed a basic model by attaching a plastic stool and an aluminum platform with four tires underneath. A 12-volt gearbox with a motor was used for the movement. But he faced several challenges to transform it into a human-like robot.

The top half of the robot is a female mannequin that can be rotated 180 degrees. From now on, the robot can only bring and serve food from the kitchen to the dining table. However, it is a fully automated system. All you have to do is load Android Pathooty with a tray of food and it will make its way to the table based on a predefined path that has been marked with black tape.

The robot is controlled by an ultrasonic sensor. In addition, a mobile application was developed using the MIT app and Admega MicroController. It can work both manually and automatically and can carry a load of up to 6 kg. 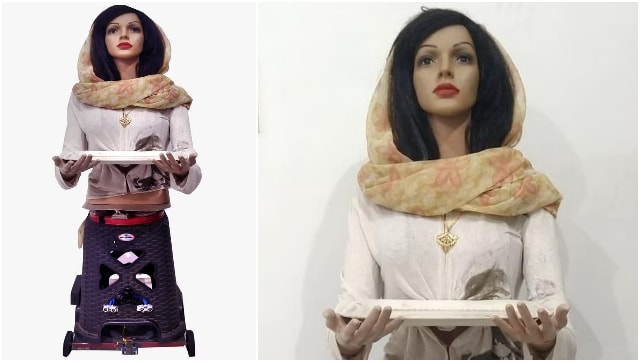 Android Pathooty uses a plastic stool and aluminum platform underneath with four tires and a 12 volt gearbox with a motor for movement.

“The way from the kitchen to the dining room is a bit longer than usual in our house. Sareena, Shiyad’s mother, always complains about this, especially in the mornings when everyone is late for school and work. Now Pathooty moves back and forth to serve us food and other things. It also reminds us of my mother’s medicines and even serves them to her,” says Abdul Rahman, Shiyad’s father.

Shiyad says the total cost of building the robot was less than Rs 10,000. “It could have been cheaper, but since I did it as an experiment, there were too many mistakes and repurchases,” he adds.

The teenager hopes to one day found a robotics and automation startup with some of his classmates. “We hope to get a patent for Android Pathooty and develop new home automation ideas in the future. Also, my biggest dream is to study engineering at Indian Institute of Technology in any city,” he said.

Why the PS5 stock shortage will continue into 2022 and beyond