Home ReviewsGaming Inside the invincible
Gaming

When it comes to the formation of Starward Industries, Game Director Marek Markuszewski addresses all the points to expect from a new team. The company wanted to bring together a group of experienced but still passionate developers, all focused on the idea of ​​creating something ambitious despite the studio’s smaller size. The surprise, however, comes from the studio’s approach to the narrative. According to Markuszewski, when developing his first project, Starward looked for stories that hadn’t already been “exploited” by the media. It wanted to tell a story that hadn’t been told before.

Granted, where Starward ended up was a story that’s been told before—nearly 60 years ago, in the novel The invincible, written by Stanisław Lem. In it the crew of the Invincible Probe investigates the planet Regis III for its missing sister ship. There they discover self-replicating machines that become more hostile over time. It reflects on what it means to be alive, the ever-growing role of technology in everyday life, and has more than its fair share of retro-futurism, proper names, and heady jargon.

For Starward, which previously consisted of developers from CD Projekt Red, Techland and others, it suited its narrative ambitions—something dense and literary. And for what it’s worth, video game adaptations of novels are relatively rare.

In Starwards The Invincible you take on the role of the scientist Yasna. In typical video game fashion, the protagonist is a somewhat unreliable narrator. She knows she is a scientist. She knows she came with a crew that has been missing ever since. But many of her memories are hazy. A voice on the other end of an earphone, that of the “Astrogator”, will help you on your journey.

It’s all pretty standard video game fare, although the source material is an interesting starting point. Lem was known for his approach to hard sci-fi and the world of The invincible feels well realized and believable in his fiction. It’s entirely possible that it translates well into a video game, where players are encouraged to explore, experiment and discover the world around them. And for the next hour, with the insights from the team, I have a chance to do just that. 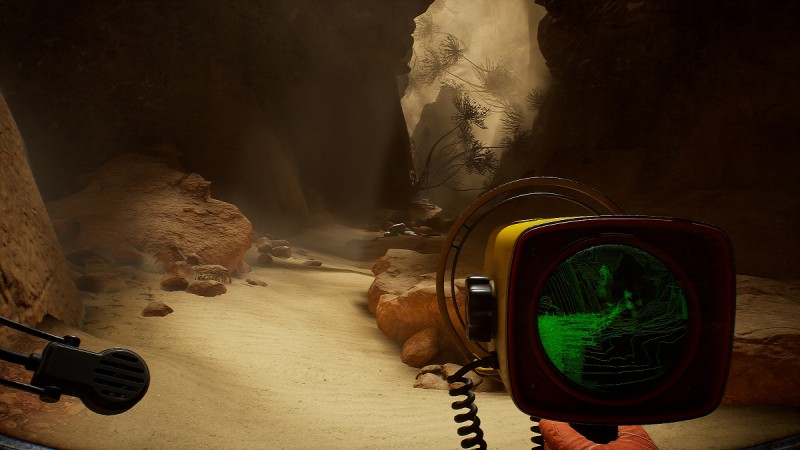 My time playing an early pre-alpha build of The Invincible begins with Yasna exploring her surroundings, noting her finds and reporting back to the Astrogator. I’m looking for a lost convoy – and maybe other survivors. Things aren’t going well.

One of the most immediate things about The Invincible is that it looks great in terms of fidelity. Textures have a lot of definition – I can really tell it’s rock all over – and the bright sun gives off a feeling of warmth as it burns the ground around Yasna. Regis III looks mostly like Mars – red, dry, dull. But in a way that reflects the desolation of the area. There isn’t much to do in The Invincible other than go forward and look around. The environment conveys this point.

So, forward I go. I can walk around stealthily or move directly to my destination. I choose the direct route. After a short drive, I find one of the convoy’s vehicles stuck under a rock fall. Yasna finds that radiation levels are high in the area. Climbing through the vehicle and out the other side of the collapse, I walk over a machine that’s about to cause trouble: a mobile antimatter cannon. Well, two to be precise. one intact. One destroyed. Nearby is a massive tunnel blasted through a rock face. One final discovery awaits me: a corpse. 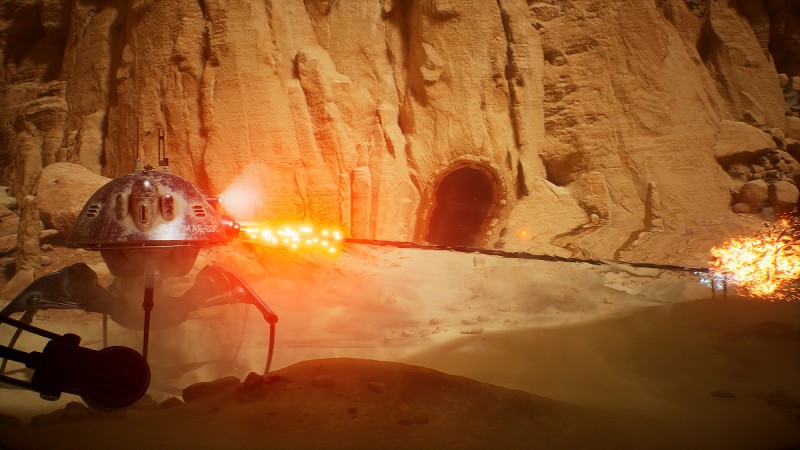 Yasna removes the onboard recorder from the antimatter cannon and the scene of carnage before me begins to come into focus. Yasna sees the missing convoy marching toward its destination. Things seem to be going well. However, the plan goes awry when he reaches Yasna’s current location.

One slide shows the team using the antimatter beam to find their own way through the rock and retrieve materials from the tunnel they created with the antimatter cannon. The next slide shows the convoy rushing out of its new hole. Another shows the cannon firing into the hole. And then mayhem. One of the antimatter cannons fires at the other, wiping them out before turning its beam on the humans. As you might expect, it tears her apart. “It’s outrageous what the antimatter beam does to the human body,” Yasna notes. Finally she looks at the last slide, a still of herself just inspecting the cannon. She is shocked but decides to continue her exploration and set her sights on what is on the other side of the tunnel. 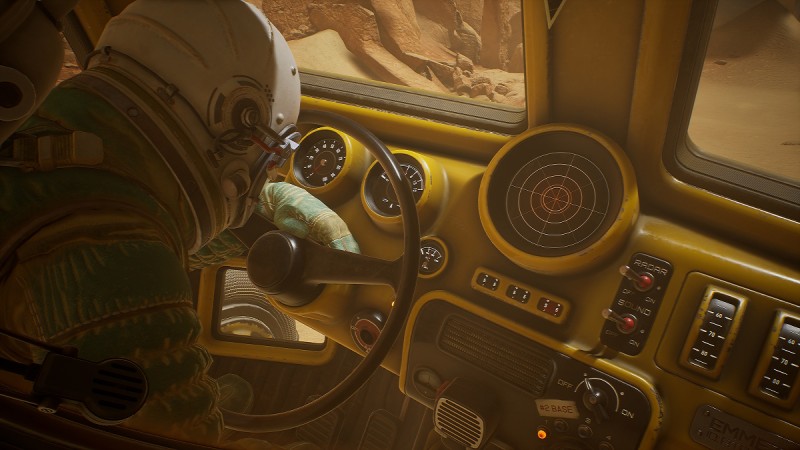 It doesn’t take long to figure out that The Invincible is a slow game – both literally and narratively. It takes time to do almost everything from walking to your goal (there’s a sprint button, luckily, which I found in the menus after a while) to listening to Yasna and the Astrogator what they’re doing – a lot .

According to Markuszewski, this is a conscious decision that makes sense. Stanisław Lem’s work is dense again. Lem is often categorized as a “hard” sci-fi writer, meaning the work focuses on being scientifically accurate and credible based on current technologies and theoretical possibilities.

“He was sort of a prophet and wrote about things like [the] Matrix, e-books,” says Markuszewski. 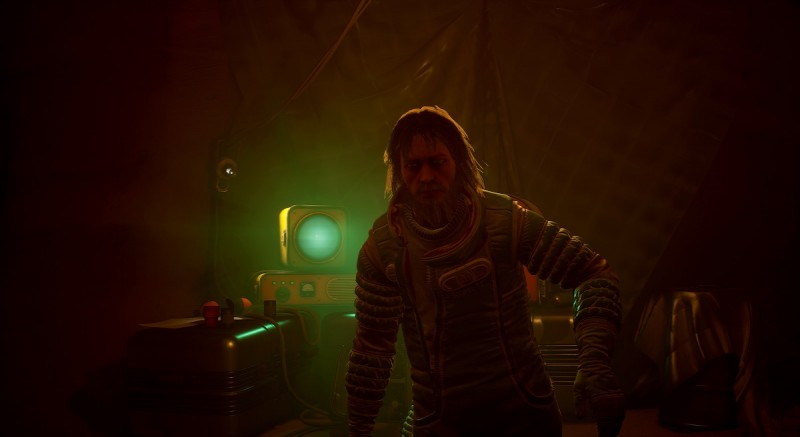 It takes time for this information and representations to be conveyed to the player through visuals and dialogue. As Markuszewski points out, you can use as many pages as you like in a book to describe what something looks like or what a character’s thoughts and feelings are. Video games don’t quite have that luxury; adjustment The invincible making something interactive was a challenge.

“If you go with the much more conventional Approach, like real-time action, leading a character, being in place – normal pace, normal speed – you don’t have that stopping moment [to visualize] all the very attractive parts of the book,” says Markuszewski. “It’s difficult to have really short slots to describe every emotion or concept [that we want to discuss].”

Based on my time with the game, I think Starward could work more on that balance. Contrary to what Markuszewski says, I spend a large portion of my gaming time doing very little, just listening to characters speak and occasionally choosing a dialogue prompt. If there’s one big problem I’ve had so far, it’s the pacing of the game. It’s hard to say how much Starward can fix this ahead of launch, but with such an interesting story concept it’s a shame it’s delivered in an often bland manner. 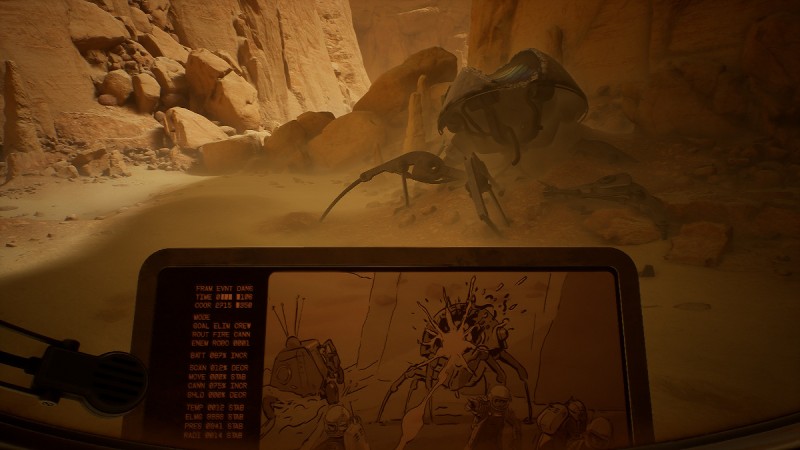 At the end of the tunnel I find a small robot carrying a box in circles around a cave. Yasna later finds that the robot is stuck in its task.

Further down I find metallic plants growing out of the cave walls. Yasna and the Astrogator then discuss the nature of biology – whether or not the metal before us can be classified as alive if it lacks things like membranes, organs and the like. All the very intoxicating stuff, with the lingo that theoretical sci-fi fans will munch on, is slowly doled out as you stand still and wait for The Invincible to give you your next objective.

On my way to my new point B, for reasons never fully understood, my little robot breaks its loop and starts running out of the cave. I follow my example and make my way back to the location with the two antimatter cannons. As my mechanical companion follows its new route and embarks on a new adventure, the intact antimatter cannon springs to life. It fires at the robot, disintegrating it completely before aiming its cannon at me. 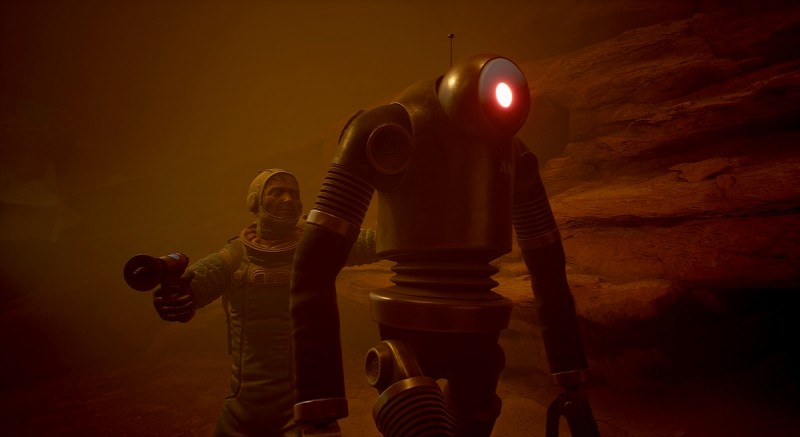 I prepare my hands to step out of the way and then fight back to save my own life from what would otherwise be sudden death. I remembered the slides I slowly flipped through and remembered it speeding through the convoy. I am willing to use their failures to my advantage to save my own life from utter destruction. On the other end of the line, Astrogator panics, knowing I’m probably seconds from dying. “Fight,” he yells in my ear.

Not to spoil anything, I’ll stop revealing more of what I’ve played. If you’re looking forward to The Invincible or are a fan of the novel, some of the narrative moments you’re looking forward to will come next. After this initial setup and some further exploration, I will say that I have many questions about what is happening on Regis III and who is on the desolate planet. 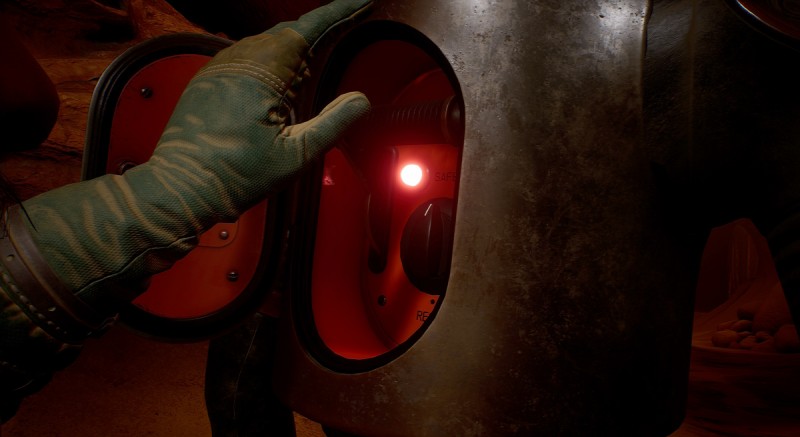 The main reason I have so many questions is that I see a mission largely out of context at a later stage. One conversation between Yasna and Astrogator stands out to me – the earlier conversation about the metal plants, biology and the human condition.

I don’t think this particular moment has anything interesting to say – or anything that other games haven’t already explored in detail, such as 2017’s Nier: Automata. But I do like a video game that asks these questions – and if only because it’s a rare example of a big-budget game that takes the time to explore more nuanced, mature questions, even when a given moment doesn’t add too much to the conversation. As it stands, I struggle with how The Invincible tells its story structurally, but I can’t help but feel that its themes are a welcome change. And I think that’s what Starward wanted – that the developers want the players to think about new concepts and ideas.

“I had this one great feeling playing Persona 5 where after an hour and a half of playing this game I actually had to stop, go outside, smoke a cigarette and be like, ‘Oh my god, I can’. I don’t believe what this game is about,’” says Starwards Community Manager Michał Napora. “Maybe people don’t need to move on [it in] in this extreme way – going out and smoking cigarettes – but it would be cool if they quit the game and maybe think about some things they didn’t think about before.”

This article originally appeared in issue #346 of Game Informer.