Smartphones are very trendy. So why is Nokia trying to revive classic feature phones?

Nokia – the name evokes an indelible sense of nostalgia in anyone in their mid-30s or older. Remember those days in college when you flaunted your very first cell phone, which was almost always a solid Nokia brick? These phones were so indestructible and tireless; if you couldn’t use it, you could at least throw it at someone in self-defense.

The advent of the smartphone – and the rise of Apple and Samsung – gradually pushed Nokia off the throne. From a dominant market share of 49.4 percent in 2007, through a steady decline over the years, to an all-time low of 3 percent in 2013, the Nokia brand seemed as good as dead.

It wasn’t because of a lack of effort. The Finnish company has partnered with Microsoft to offer a range of smartphones running Windows Mobile OS under the Lumia brand. And they were well received – Lumia smartphones were known for their quirky design, bold colors, really special cameras and super-smooth user software. They came too late, however, and in 2014 Nokia sold its smartphone business to Microsoft for around $7 billion and headed out into the sunset. It wasn’t long before Microsoft, after launching a handful of its own-brand Lumia devices, threw in the towel and retired the Lumia lineup, burying Nokia’s legacy.

As seen in the chart below, Nokia rose from a global sales high of €51.06 billion – the year Steve Jobs announced the first iPhone – to an all-time low of €11.76 billion when the company launched its smartphone Business sold to Microsoft. 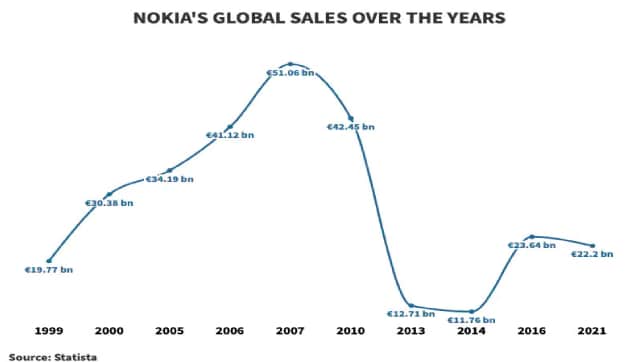 Suddenly, in 2016, Finnish mobile phone manufacturer HMD Global announced that it was buying back Nokia’s mobile business and selling phones – this time running Android – under the iconic brand again. Since HMD Global revived the brand, the Finnish icon has consistently generated sales close to €20 billion through the end of 2021, according to Statista.

Today, however, Nokia is not in the news with its smartphones, but with its feature phones. The Finnish brand has revived and reimagined some of their most popular and well-loved feature phones, which have found a surprising number of takers, from those wanting to pocket a slice of nostalgia to youngsters looking to try something new and retro at the same time. In fact, Nokia officially sells more feature phones than smartphones in India. On its official website, Nokia has listed 16 feature phones – including redesigned icons like the 3310 and 6310 – and just eight smartphones ranging from Rs 5,500 to 29,999.

I turned to HMD Global to understand this trend – is the focus on feature phones a happy accident, or was it always part of the larger plan to bring back Nokia Nostalgia?

Sanmeet Singh Kochhar, vice president of HMD Global for India, Middle East and Africa says that while nostalgia was a factor, the company also made this decision as there was a growing interest and demand for premium feature phones before the Background of a rising culture of digital detox.

We’re proud to bring classic, iconic Nokia heritage combined with innovation to the field of feature phones…many people today, especially young people, prefer a simple second phone that serves the basic purpose of taking breaks and getting away from the virtual world and social media,” says Kochhar, adding, “All of these devices have popular features of the ’90s, iconic games like Snake in a modern avatar.”

Of course it didn’t hurt that Nokia was the official brand of choice for James Bond in his latest film, no time to die “It was indeed a great union for us,” he says.

But most of all, according to Kochhar, the skyrocketing popularity of Nokia’s feature phones is due to “a growing realization that excessive use of smartphones throughout the day isn’t all that healthy.”

Where are Nokia’s smartphone ambitions? Globally at least, the company has consistently released flagship quality models. But in India, the company appears to have narrowed itself to a more budget-conscious segment, with the most expensive model, the G60 5G, priced at Rs 29,999. “India is a key market for Nokia phones, where we have many loyal fans,” explains Kochhar.

“Our smartphone strategy (for India) is to focus on segments with a robust portfolio that appeals to all of our audiences. We build durable devices – our smartphones are European quality, with an ad-free interface, quarterly security updates and longer battery life,” he says.

However, “the budget segment has huge potential in a market like India,” and Nokia is keen on delivering a “high-quality, hassle-free experience.”

“All of our smartphones offer a clean Android operating system, an ad-free user interface, longer battery life – with most phones offering a competitive three-day battery life and twice as many security updates as our competition,” adds Kochhar. 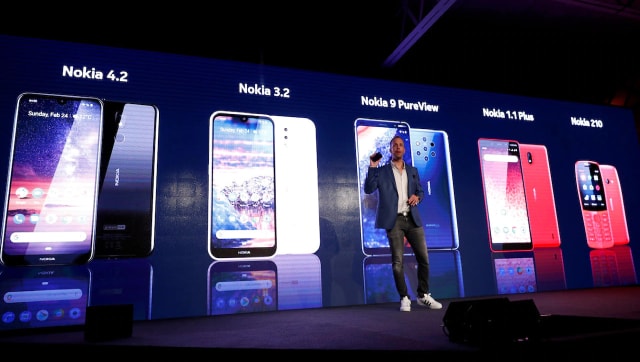 Nokia offers its customers a 3-3-2 promise – 3 years of operating system and security updates and a 2-year warranty. (Image: News18)

Nokia also views India as a strategic manufacturing and export hub, Kochhar adds. “India is a sourcing and manufacturing destination and we are excited to play a role in realizing the Government’s vision of ‘Make in India’ and a ‘Self-Sufficient India’.”

AAccording to him, almost all Nokia phones sold in India – the C and G series as well as the feature phones – are made in India. “We announced last year that India would be an export hub for us. We have already started exporting the Nokia 105 to other markets and plan to export some other feature phone models as well as our range of smartphones soon,” he adds.

According to Kochhar, Nokia is once again the king of feature phones, leading the segment in India for two years in a row. “According to IDC reports, we continued to be #1 in volume in the third quarter and remained #1 in value throughout 2022,” said Kochhar.

Globally, he says, Nokia’s entry-level and smart segment sales each grew 17 percent between 2020 and 2021.

“Nokia Mobile is one of the longest-established mobile phone brands in India and around the world… premium Nordic design and craftsmanship is in our DNA, which is why we work hard to deliver thoughtful, purposeful designs for every budget. We strive to deliver maximum quality in all price ranges,” adds Kocchar.

How to Fix Microsoft Store Error Code 0x87E10BD0 on Windows

Wikipedia fears that without Section 230, its volunteer...

The morning after: Microsoft’s next-gen Bing is “more...