Vision Series In The Works At Disney+ – Report 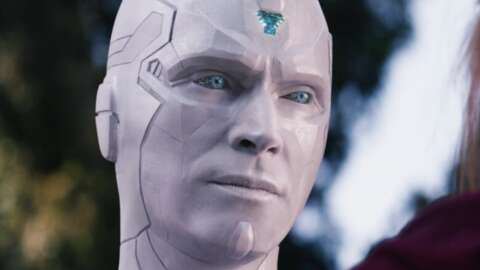 It looks like the visionaries at Marvel Studios have an eye on their next show. While Agatha Harkness will follow up on the magical side of WandaVision with her own series, the Vision himself might be getting a show, deadline reports.

The series will reportedly be called Vision Quest, and follows the philosophical machine as he tries to regain his memory and humanity. The show will reportedly focus on Bettany’s character, but the door is open for Elizabeth Olsen to reprise her role as Wanda Maximoff. The two characters have been connected since early on in their MCU tenure, and it makes sense that one would accompany the other. Wanda’s fate is in question after the end of Doctor Strange and the Multiverse of Madness, and this could be her way back to the land of the confirmed-living.

The climax of WandaVision pitted a version of the vision manifested by Wanda against one revived from the vision’s remains (or is it wreckage?), with the latter sporting a striking all-white look, where they fought and debated the question of when is a ship no longer the same ship (and The Vision no longer the same Vision). When last we saw White Vision, he declared himself to be The Vision and zipped off into the sky. The project is reportedly being called the White Vision project by some internally.

WandaVision executive producer Jac Schaeffer will reportedly act as showrunner on the series. Disney and Marvel Studios have not yet commented on the news. With She-Hulk concluded recently, other Disney+ shows in the works from Marvel Studios include the other WandaVision spinoff, Agatha: Coven of Chaos, as well as Daredevil: Born Again, Ironheart, Secret Invasion, Echo, and Loki Season 2 on the live – action side; upcoming animated shows include What If…? Season 2, X-Men ’97, and Spider-Man: Freshman Year.

The 7 most environmentally friendly tires