What is Variable Refresh Rate (VRR)?

VRR, or Variable Refresh Rate for short, is a feature on monitors, TVs, and other types of displays that greatly enhances the viewing experience, from gaming to movies to web browsing. Along with 4K resolution and HDR, it is one of the most important innovations for display technology in the last decade.

Even if you’re a newbie to the technology, you’ve probably already seen VRR in action; that’s how universal it gets. Therefore, it’s more important than ever to understand VRR and decide whether you should start using it.

What is variable refresh rate?

Variable refresh rate is a technology that allows your monitor or television to dynamically adjust its refresh rate based on the frame rate of the content being displayed. Every monitor needs to refresh its image every second, and that’s the refresh rate (measured in Hz). Similarly, movies, TV shows, and games each show a certain number of frames per second (fps).

When you view media, the amount of images you see depends on both the frame rate of the media itself and the refresh rate of the display. Whichever is slowest, you’ll see your media at that speed. So if you watch a 24 fps movie on a 144 Hz monitor, you see the movie at 24 fps. But if you play a game like Counter Strike Global Offensive On a 60Hz monitor you will only see 60fps even if the game is running at 100fps or even 1000fps. A monitor with a high refresh rate will show you more unique frames.

The problem with screen tearing

Running media at a frame rate that doesn’t match the display’s refresh rate can cause screen tearing, a very ugly visual bug that occurs when the display is forced to show two different images at once. For example, a 30 or 60 fps video displayed on a 60 Hz display will not show screen tearing, but a 35 fps video will.

Screen tearing wasn’t really a problem for a while as all the content we watched was at the correct frame rate for the display: 30 and 60 fps for the home TV and 24 fps for movies in the cinema. But screen tearing has become more and more of a problem for people as games, especially on PCs, have become more popular.

Where to find VRR 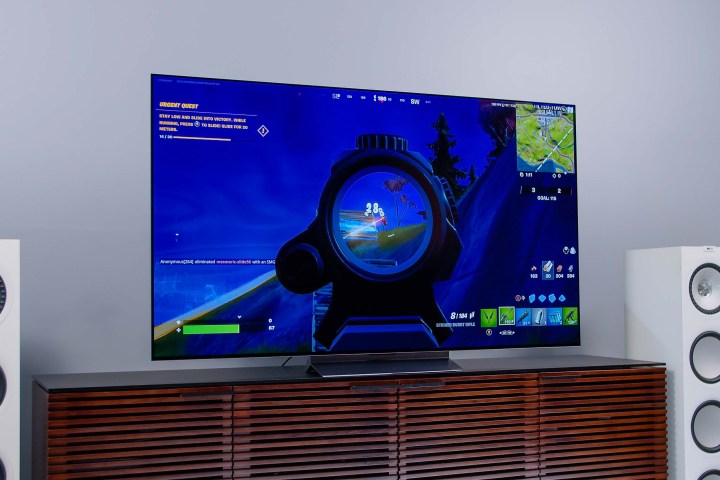 Everything changed in 2014 when VESA, an international non-profit organization that sets standards for a variety of electronics, added Adaptive Sync to DisplayPort, which is basically HDMI but specifically for PCs. Adaptive Sync was the first implementation of VRR technology, allowing the display to adjust its refresh rate to match the media frame rate. For gamers, this meant it was finally possible to run games at a frame rate other than 30 or 60 fps without screen tearing, as long as the frame rate was between the maximum and minimum refresh rates of the display.

AMD, Nvidia, and Intel all support Adaptive Sync on their modern GPUs, although this hasn’t always been the case. AMD has been a firm proponent of Adaptive Sync, and the company even rolled out its own special version of the standard, FreeSync. Initially, Nvidia decided to bring its own proprietary VRR technology called G-Sync to desktop GPUs, while laptop GPUs used Adaptive Sync. It wasn’t until 2019 that Nvidia finally allowed its desktop GPUs to use Adaptive Sync and FreeSync monitors, a great change for Nvidia users who, up to that point, were forced to buy expensive, albeit high-quality, G-Sync panels.

The first non-PC device to support VRR was the Xbox One, which received FreeSync support in 2018. Microsoft’s current generation Xbox Series X and Series S consoles also support FreeSync. Meanwhile, Sony hasn’t followed VRR with the same enthusiasm as its rival, finally announcing VRR support for the PlayStation 5 in April 2022. Although the PS4 could likely be updated with VRR support (the underlying hardware is nearly identical to that in the Xbox One), Sony hasn’t said anything about PS4 and VRR support, so it probably won’t happen.

High-end TVs have also slowly adopted VRR. The LG C2 OLED (pictured above) is an example of a newer TV that supports display technology.

2020 was an important year for VRR outside of gaming as it was the year that Samsung’s Galaxy Note 20 Ultra was launched and it was the first phone to support VRR. Since then, many high-end and mid-range phones support VRR. Mobile phones in particular benefit from VRR, since dynamically changing the refresh rate can save electricity in addition to the pleasant viewing experience.

Although VRR technology is becoming more widespread, it is not available on every display. It’s somewhat rare to find this feature outside of gaming monitors, gaming laptops, and high-end phones. However, it’s only a matter of time before VRR becomes the norm, along with 1080p resolution and 16:9 aspect ratio.

We remember Internet Explorer, the now-dead browser that once powered the Internet